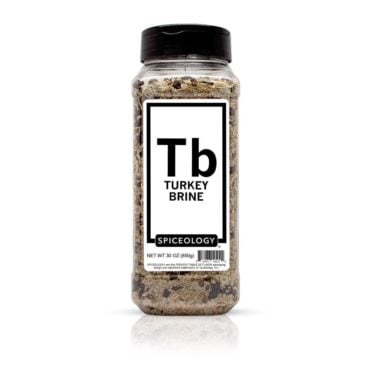 One of the best trends to spread from the restaurant to the home kitchen is brining your Holiday bird of choice. Our turkey brine features garlic, brown sugar, juniper berries, plenty of salt, and works well as a wet or dry brine. It's a great option for meats that tend to dry out during cooking.

19
REWARD POINTS
?
Earn points every time you buy a product with our Loyalty Program! Be sure to sign in to your Spiceology account before checking out to claim your points. 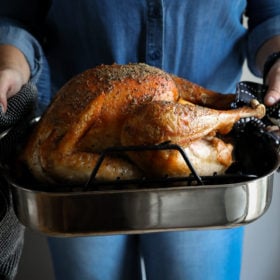 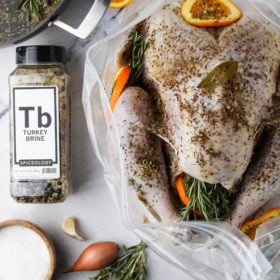 How to Brine a Turkey

How long to brine a turkey

Brining is typically a process in which meat is soaked in a salt water solution similar to marination before cooking. Meat is soaked anywhere from 30 minutes to several days. The amount of time needed to brine depends on the size of the meat: more time is needed for a large turkey compared to a broiler fryer chicken. Similarly, a large roast must be brined longer than a thin cut of meat.

Not sure how to make your own turkey brine? No problem, Spiceology has you covered with a turkey brining blend that takes the hassle of collecting all the ingredients needed to properly brine your poultry. Our fresh spices add a salty, sweet and sharp flavor to your favorite turkey recipes and are sourced from Indonesia, India, Malaysia, Vietnam, Brazil, Spain, Morocco, Tunisia, Albania, and Egypt.

Fun Facts: Food scientists have two theories about the brining effect, but which one is correct is still under debate.

The brine surrounding the cells has a higher concentration of salt than the fluid within the cells, but the cell fluid has a higher concentration of other solutes. This leads salt ions to diffuse into the cell, while the solutes in the cells cannot diffuse through the cell membranes into the brine. The increased salinity of the cell fluid causes the cell to absorb water from the brine via osmosis.

The salt introduced into the cell denatures its proteins. The proteins coagulate, forming a matrix that traps water molecules and holds them during cooking. This prevents the meat from dehydrating.