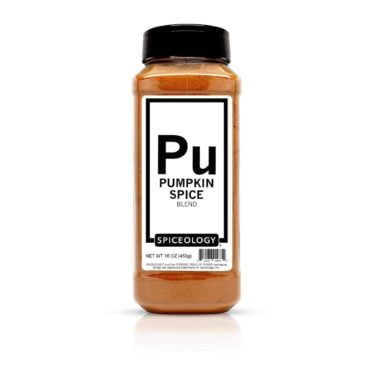 The balance of ground cinnamon, nutmeg, ginger, cloves and allspice make this classic fall blend irresistible. Put it to work in desserts and beverages, or well balanced with sweet potatoes and squash.

20
REWARD POINTS
?
Earn points every time you buy a product with our Loyalty Program! Be sure to sign in to your Spiceology account before checking out to claim your points. 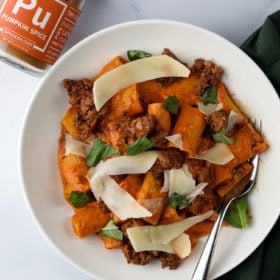 What Is in Pumpkin Pie Spice?

The Official Flavor of Fall

Pumpkin Spice has been the official flavor of fall for the last two decades.  It’s synonymous with the end of summer, cooler temperatures, autumn leaves, and sweater weather.

By the beginning of October, you’ll see the famous flavor everywhere, in coffee, cakes and even chicken wings.  You can make your entire house smell like cinnamon, cloves, ginger, nutmeg, and allspice – all ingredients that make up this favorite flavor.

Fun fact: did you know pumpkin is not even included as an ingredient?

This popular spice was traditionally used to flavor pumpkin recipes, which is how it got its name.

Spice companies helped bakers save time by putting all the ingredients into one blend, so they no longer had to measure out each individual flavor separately.

In fact, Spiceology is proud to carry several Pumpkin Spice flavor options. After all, we believe you should never let a pie, coffee cup or sweet potato go un-sprinkled this year (or any year!)

Not only does it offer great taste, but a hearty, seasonal smell as well which is guaranteed to make you feel festive and ready for fall.

The origin of this fall favorite dates back much later than the current coffee house craze.

In fact, you have go back 3,500 years in history to get the real story of this popular spice blend.

Researchers discovered nutmeg residue on ancient pottery shards used in Indonesia thousands and thousands of years ago. Spices eventually became valuable commodities which later led to the global spice trade all over the world. Spices weren’t just used in food back then, but also in medicine.

Nutmeg was expensive and difficult to find and over the years its use evolved. More recently, chefs and foodies started blending popular flavors to create the tastes we’ve come to know and love.

At Spiceology, we recognize how deep your affection for pumpkin spice probably is.

Our chefs have put together some unique Pumpkin Spice recipes that are sure to satisfy your cravings.

Whether you’re looking for a fall cheesecake, cookies, pocket pastries or pull apart bread – Spiceology is your one-stop-shop for all things pumpkin spice.

Our blend is the perfect balance of ground cinnamon, nutmeg, ginger, cloves, and allspice. We hope it finds a permanent place in your pantry and that it brings full flavor to your foods, not just in the fall, but year-round.

How to Make a Pumpkin Spice Latte

It’s that time of year and we know how easy it can be to whip out the card and pay $5+ for a warm cup of pumpkin deliciousness, but let us tell you – it’s so easy to make at home, you’ll wonder why you never did it before.

Get a FREE sample with your order.

Choose a flavor below and get a FREE .5 oz sample pack, plus recipe card with any purchase.*

*one sample pack per order, please.

This spicy rub is packed with flavors of soy, sesame, and orange.

This amped-up teriyaki rub adds a Pacific Rim punch to any dish.